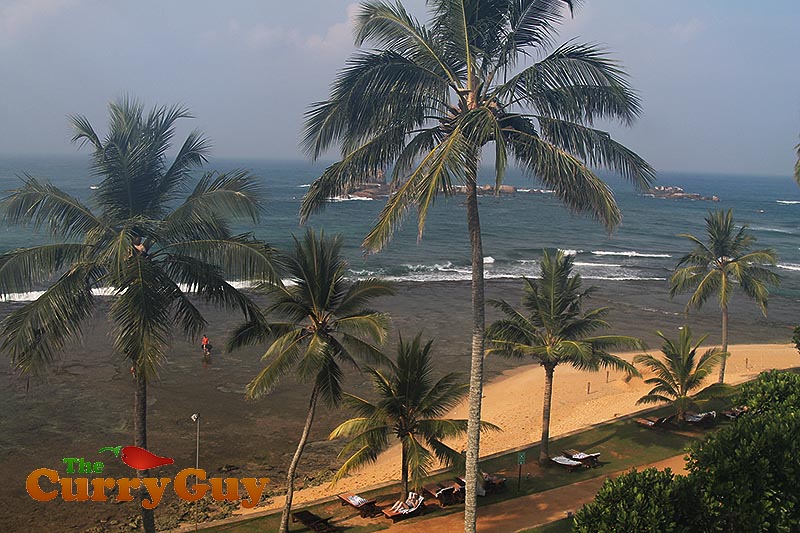 The beach at Hikka Tranz. One of the most beautiful beaches I have ever set eyes on.

I’d been looking forward to visiting Hikka Tranz in Hikkaduwa, Sri Lanka for some time. As jobs go, this was a good one as I had been invited with three other bloggers to experience Sri Lanka and also a few of Cinnamon Hotels‘ luxury hotels. Finally I was there!

Food blogger and author Sarah Brittan (My New Roots) and I were picked up from the airport in Colombo for the two hour drive to the hotel. Looking out the window of the van along the way, I could tell this was going to be a holiday to remember. It was so green and lush. We passed palm trees, cinnamon plants and tea plantations all along the way. 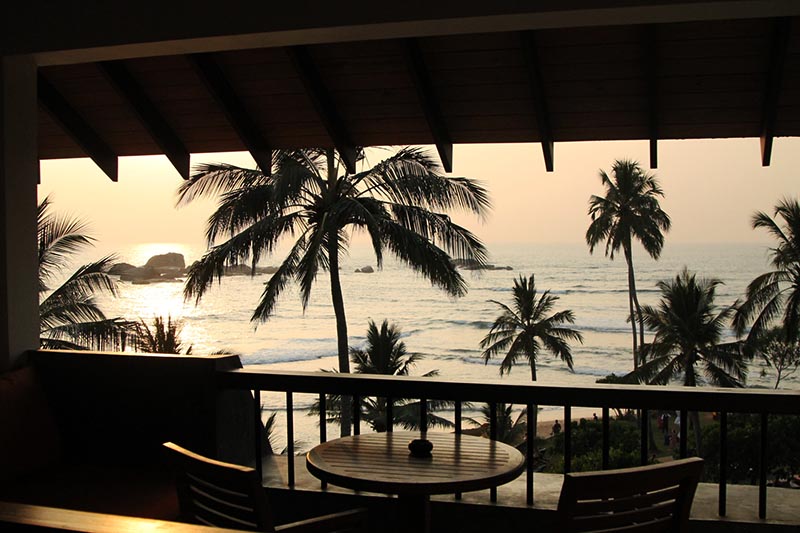 View from my room at Hikka Tranz. It doesn’t get much better than this.

When we arrived at Hikka Tranz, we were offered cold drinks and then shown to our rooms. My suite was very comfortable. Air conditioned and large. All of the home comforts were there. I walked out onto the patio off my room and immediately facetimed my wife and kids. That photo above was my view and I really wished my family could be there to experience it all with me. Our boiler back at home had just packed in and they were freezing. I didn’t quite get the reaction I was hoping for. 🙂

In addition to writing about all that Cinnamon Hotels have on offer, we were also there to shadow Marco Pierre White’s highly publicised visit to Sri Lanka with Cinnamon Hotels. I had no time to rest, there was a cocktail party starting down by the sea where Chef Marco was the guest of honour and us food bloggers were all invited. January is summertime in Sri Lanka and it was nice and warm as the sun set over the Indian Ocean. 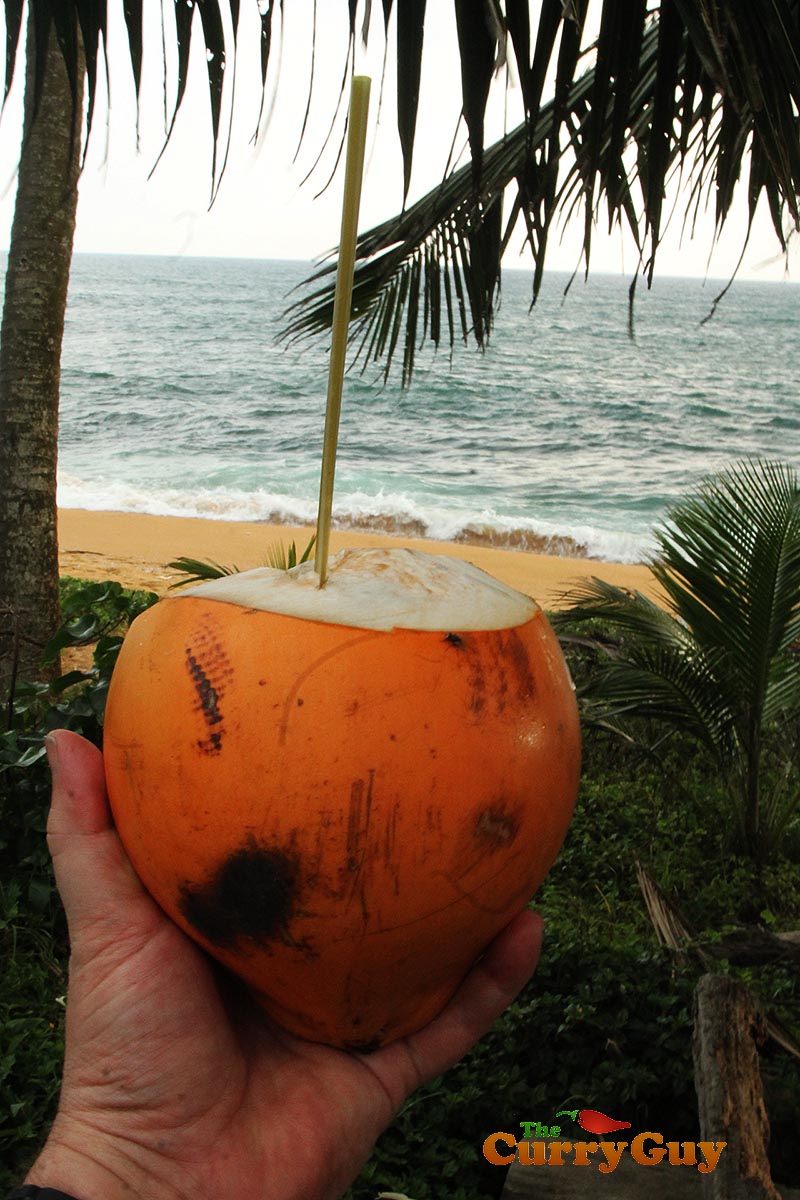 A nice cold drink by the sea. It doesn’t get much better than this.

The cocktails, I had my fair share, were spot on as were the canapés that were my first real taste of Sri Lankan food. I was in Sri Lanka! This was just too good to be true.

I walked up to Marco who was having photos taken with the chefs from the hotel and introduced myself. I’d just finished reading his book “Devil in the Kitchen” and wasn’t sure what he would be like. He turned out to be quite laid back and easy to talk to; a nice and down to earth guy. More on Marco in later posts.

Between snacking and drinking by the pool and dinner, I had an hour to kill so I went for a quick swim. What a place! 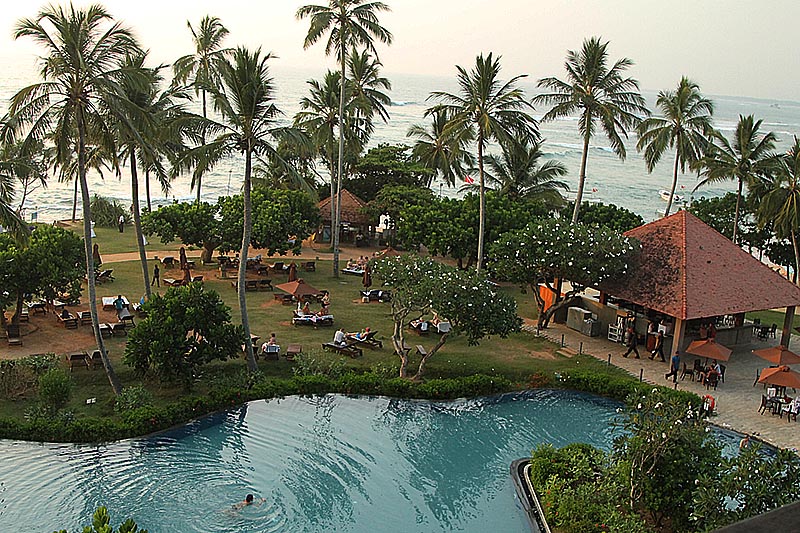 How’s that for gorgeous?

The meal that evening was put on specially for Marco’s visit. You would not believe the work that went into it. I met Sarah and another of the food bloggers,  Roxanne Bamboat (The Tiny Taster) for drinks and then that spectacular dinner. The thing was – and I wasn’t to know this at the time – this was a good sign of things to come. The food served at each of the Cinnamon Hotels we visited was out of this world even when Chef Marco wasn’t in the building. As much as I wanted to just sit down and eat, I had to take a few pics. 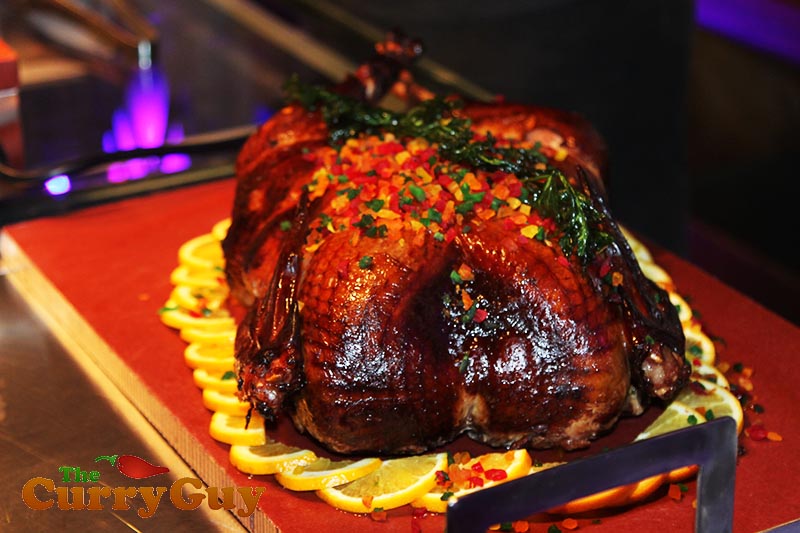 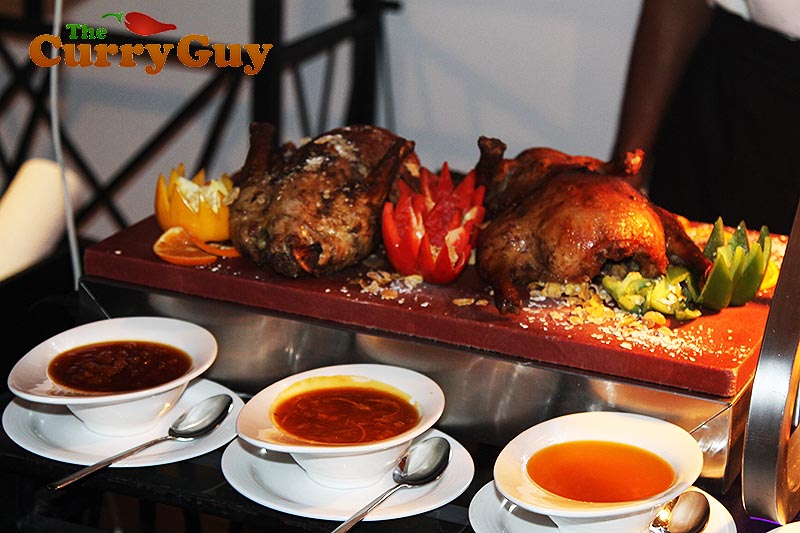 A couple more beautiful roasts. The sauces were the perfect accompaniment. 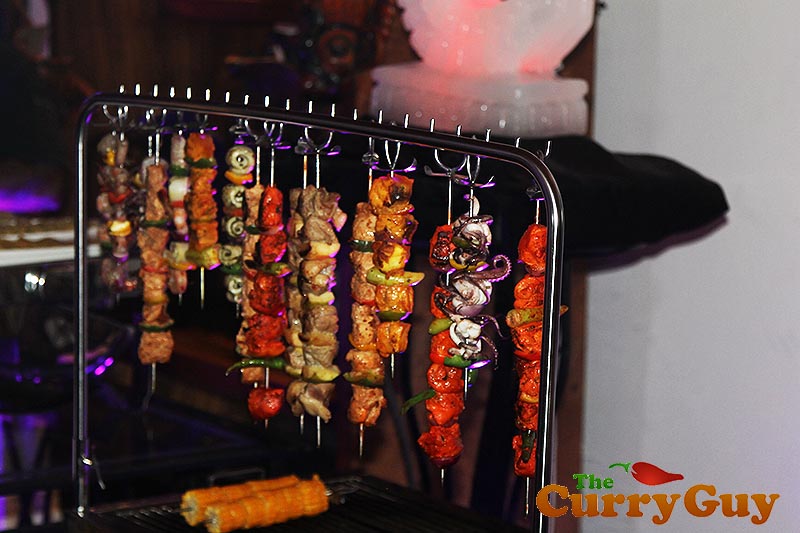 Kebabs anyone? The chefs were making kebabs to order. From squid to chicken, the choice was yours. 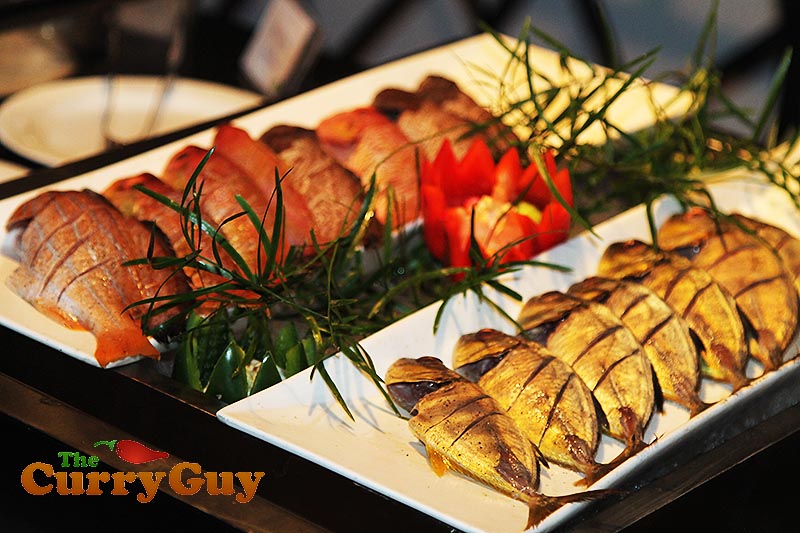 Fresh locally caught fish and lots of it. I just had to pick what I wanted and the chefs cooked it. I wish I had a few more stomachs. 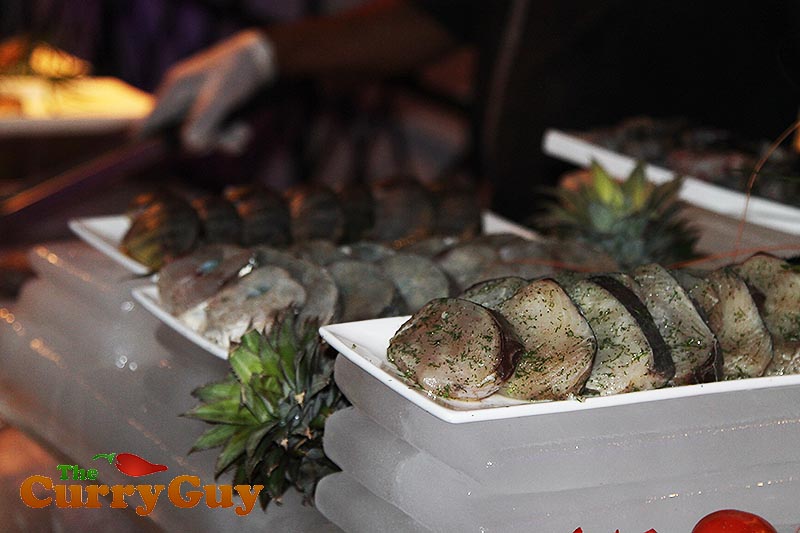 Pretty much anything you could think of was there. 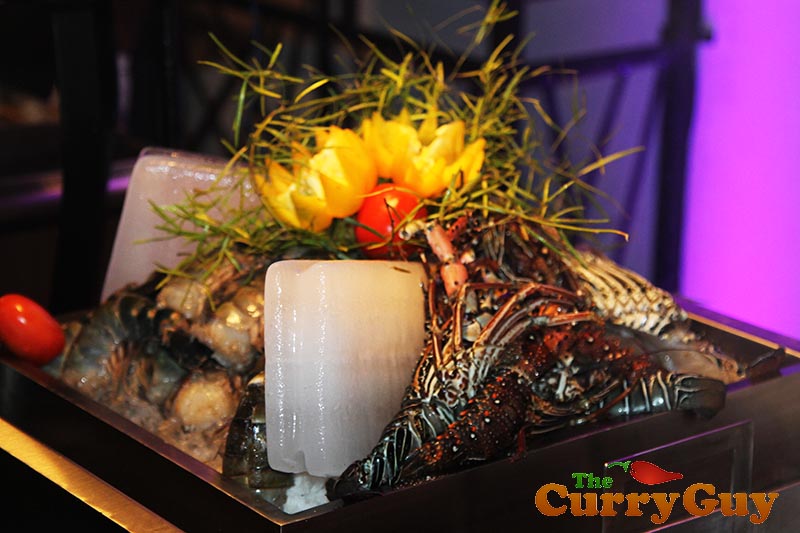 There was no way I was going to pass on the lobster! 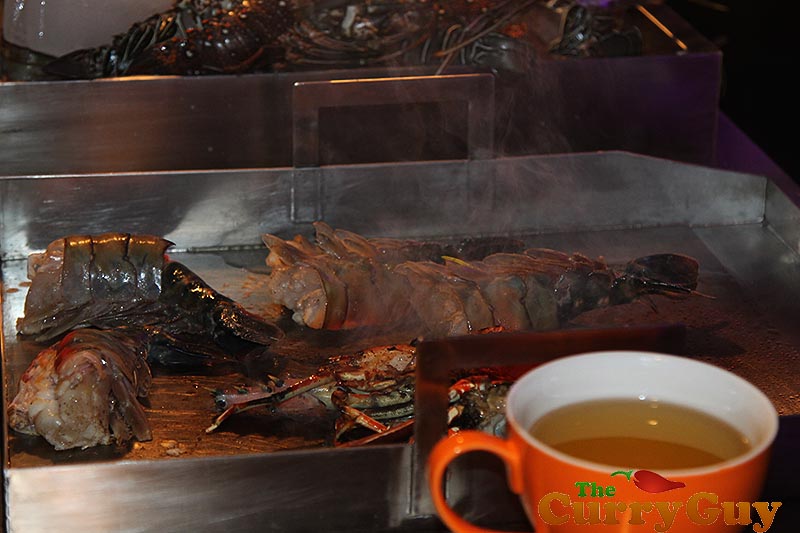 I’ll have that lobster please! 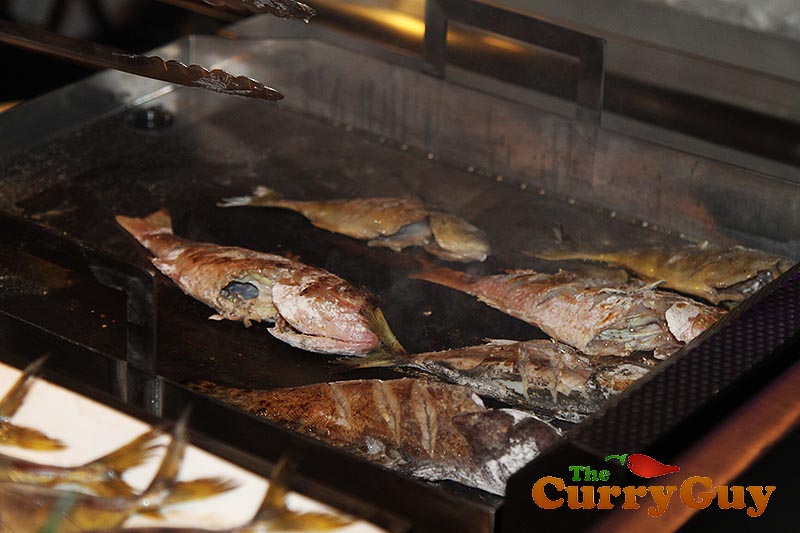 Some of the fish I tried I’d never seen before. This was a food lover dream. 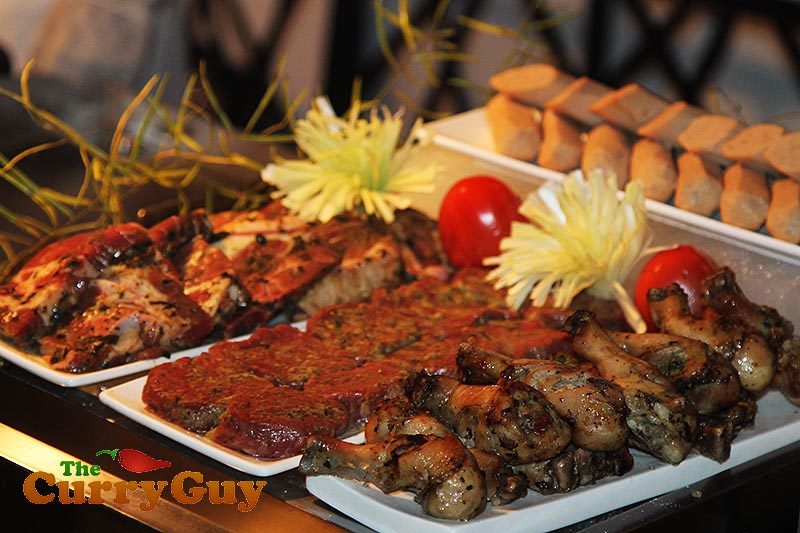 Not a seafood fan? No problem! There was everything from chicken to homemade dosas. 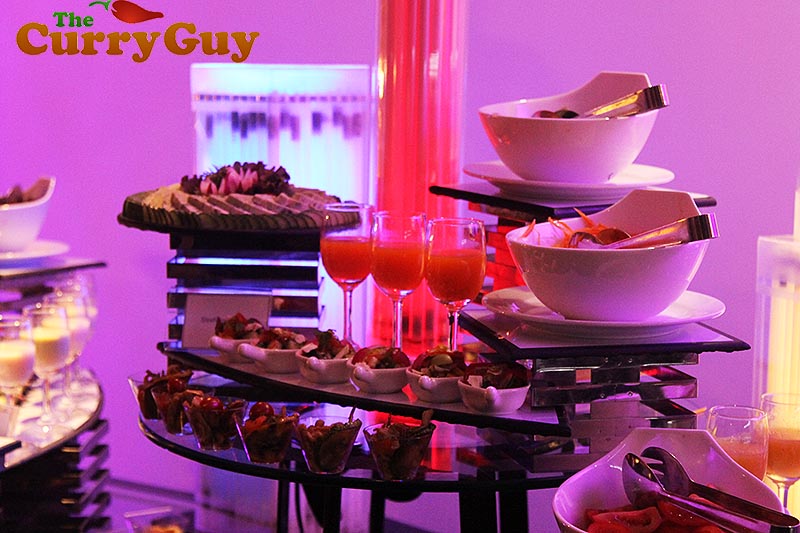 At one end of the room was a massive selection of veggies, tasty drinks and more canapés. 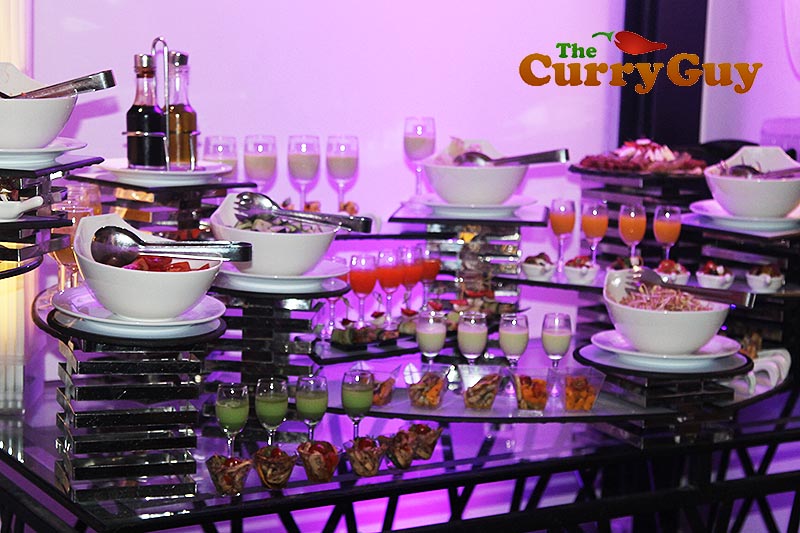 After that evening of fun and overindulgence, I was ready for bed. I’d been told that if I make my way down to the sea at 6.30 the next morning, I could swim with wild large turtles. I wasn’t going to pass up that opportunity.

I wasn’t quite ready to wake up when the wakeup call came but I got up anyway. I put my swim trunks on and headed down for the sea. I got a few photos of the turtles before packing my camera and jumping in for a swim. If you go to Hikka Tranz, I highly recommend getting up early and swimming with these friendly turtles.

The huge turtles are quite friendly. They only come into shore for about half an hour between 6.30 and 7.00. 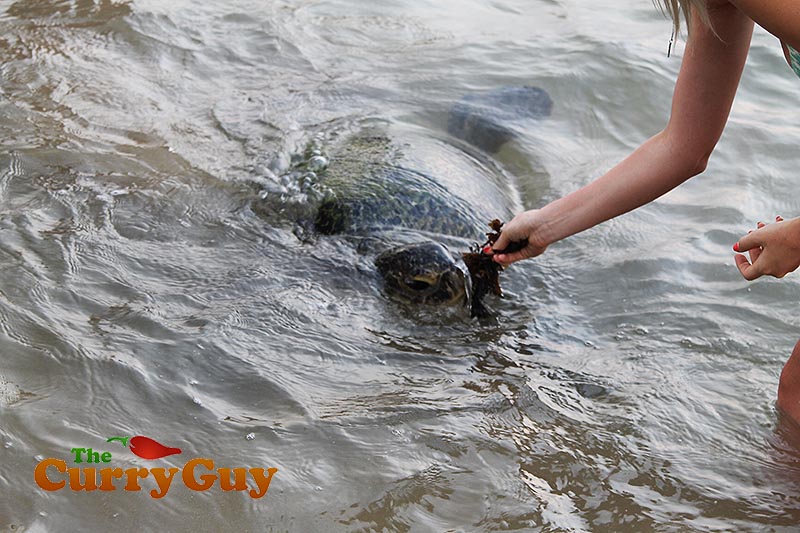 You can even help feed them as long as it’s something that grows in the sea. 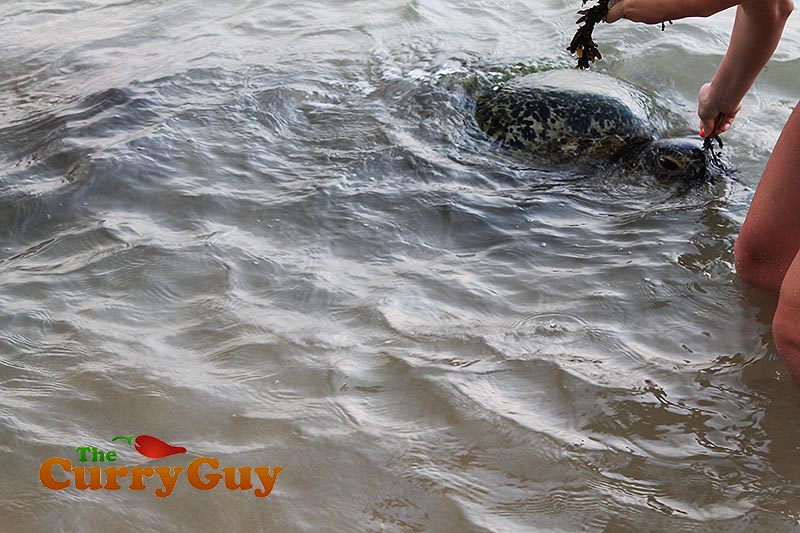 How cool is that!

We didn’t have enough time in this beautiful place. That afternoon we were being picked up to go to the next hotel Cinnamon Bey Beruwala. But not before a quick trip up the road with the head chef of Hikka Tranz to the local fish market and a cookery lesson. Executive Chef Julinda Pushpakumara showed us all how to make one of his incredible fish curries. You can see the recipe here. If you love seafood, you are going to have to give it a go. 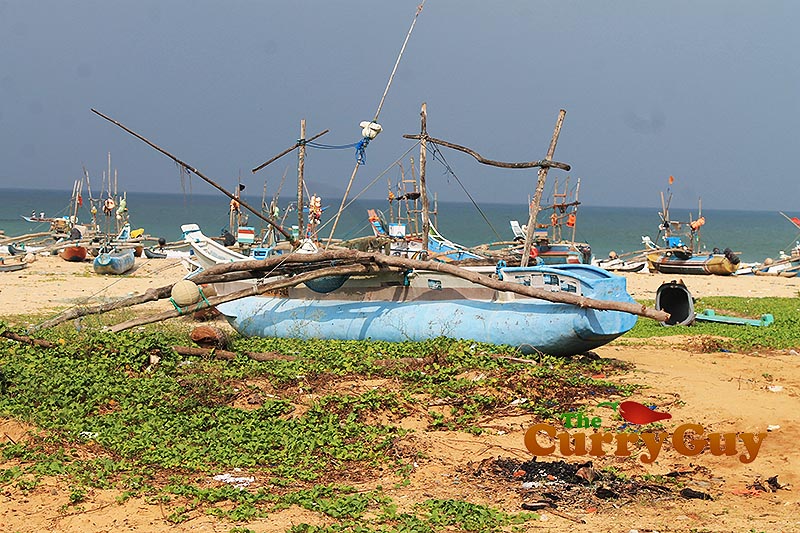 The fish market is just a short drive up the road. Definitely worth a visit. 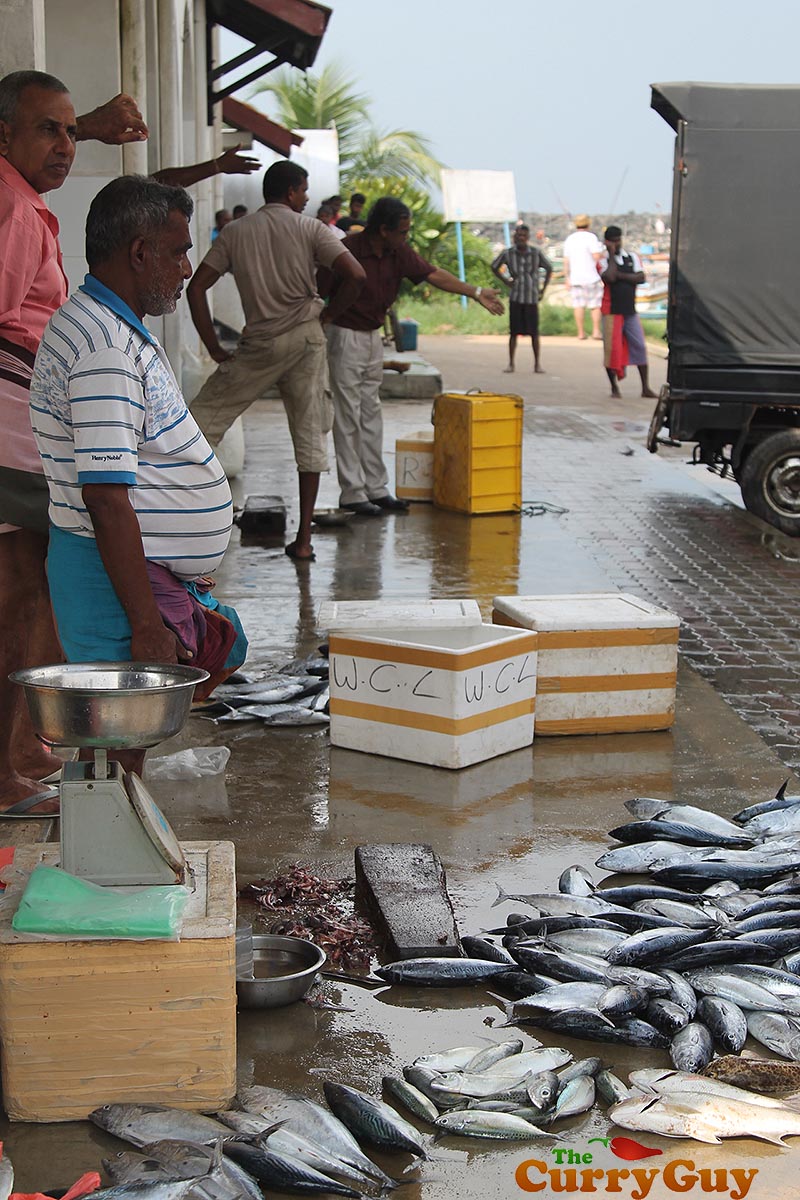 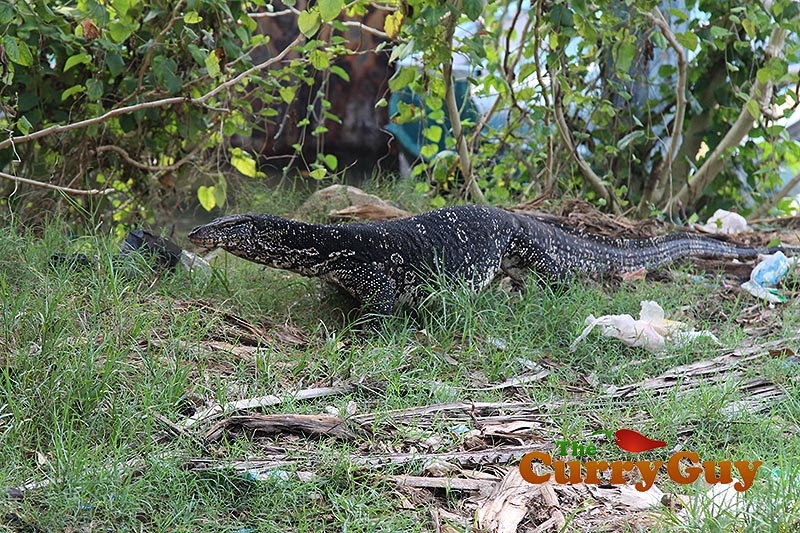 While admiring the market, this 10ft water monitor walked up behind me. I moved very quickly. They aren’t dangerous. 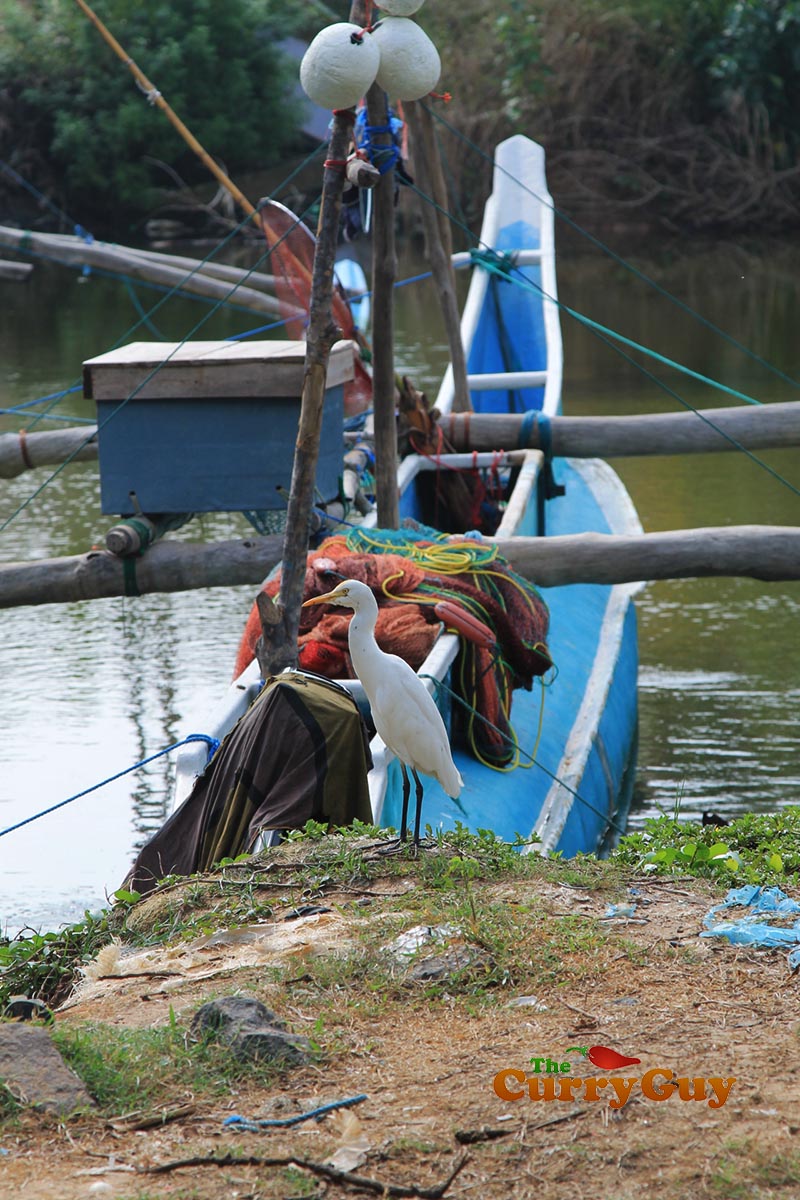 I was flown round trip from Heathrow to Colombo courtesy or SriLankan Airlines. Such a nice airline. Excellent service.

Loved this article, my roots go back to Ceylon although I haven't managed to visit yet. I love Sri Lankan food and reading of your mini-adventure has me looking for flights for 2018 - none available yet :(

Thanks for your insights Dan.

Can't believeve it but we're at the Hikka Tranz in Hikkaduwa, Sri Lank right now (late Feb16). The food in the hotel is great and we can recommend its Crab Restaurant and evening meal on the beach run by their wondetful host Samantha.

Outside in Hikkaduwa and nearby Galle and throughout the island there are a whole load of restaurants serving awesome and very affordable trad Sri Lankan food. Waiters sometimes ask you how spicy (ie hot) you want it and if they don't be sure to tell them or they'll tame it down. A great country, people and mix of cultures and influences has produced some of the best curry / healthiest cuisine on earth here. If you love your food check out Sri Lanka or some of the very few restaurants back in the UK and Europe - we could do with a whole load more as the Bangladeshi / BIR curry monopoly is very samey and nothing compares to the intensity of Sri Lankan or genuine Indian cuisine. Cheers for the SL recipes!

It sure it an amazing place. I can't wait to go back. Have fun!

Wow, looks like a food lovers dream indeed Dan. What a great experience. From the amazing food, swims, turtles and monitor you know how to have a good time. Too bad the family couldn’t accompany you, but that’s the life of a food blogger. Somebody’s got to do it! Thanks for the photo journey.