You can make this chicken balti from scratch in no time!

As you can see from the publication date of this chicken Balti recipe, I wrote it quite a few years ago. I recently revisited the recipe as I often do.

I’ve learned a lot over the years messing about in my kitchen and wanted to give you my updated version. 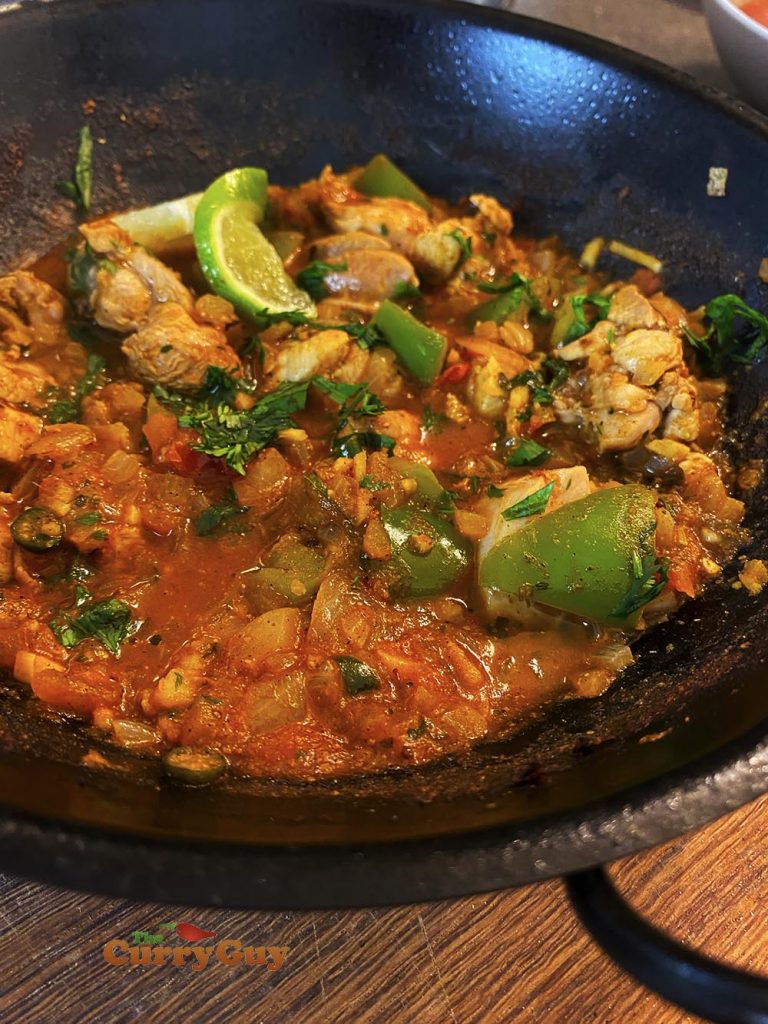 So easy to make and delicious too!

This chicken Balti was actually one of the first curry house/Balti house recipes I learned while doing recipe research.

I remember very well walking into the restaurant kitchen in Birmingham’s Balti triangle to see how it was done and being a bit disappointed.

This is how chicken baltis were first made.

Not that I didn’t like the chicken Balti that was served to me that day! I loved it. So perhaps I should explain…

The chef that day decided to show me his balti recipe from scratch. Although he used a base sauce for his baltis and added pre-cooked tandoori chicken to the baltis that he served in the restaurant, he thought he should break it down for me.

In hindsight, this was a great idea.

I wanted to learn the actual chicken balti recipe from the restaurant but he assumed I didn’t know what that ‘secret’ base sauce recipe was all about.

He also thought that many of my readers would not want to make a base sauce before starting cooking.

He was right there!

The curry house base sauce was developed for speed and economy. The thing is, it also makes the curry delicious.

Rather than frying up a large amount of onion and tomatoes and adding water as is done in the following recipe, base sauce is added instead.

This is not only faster but also gives the chicken balti and completely different flavour and a smoother texture.

Many people prefer this chicken balti cooked from scratch. There is a lot less prep work to do and it does taste amazing.

What exactly is a Balti?

Balti curries first became popular in the 70s and 80s.

These Pakistani restaurants were serving their own neighbourhoods but few others.

The Bangladeshi restaurant chefs were dishing up delicious chicken tikka masalas, Madras and vindaloo curries but the authentic Pakistani curries served at Pakistani restaurants needed forward planning and took a lot longer to get out to the table.

The idea of using small stainless steel pans (Balti Bowls) instead of the more authentic cast iron karahis changed all this. Special Balti bowls were produced the first time.

The hot Balti curries were cooked over high heat and served in the same bowls they were cooked in. The stainless steel pans heated up much faster than cast iron so service was much faster too.

Unfortunately, the company that produced all those Balti bowls went out of business and the manufacture of the bowls was sourced out to India and China.

These imported Balti bowls were inferior in quality and eventually, the Balti craze and the pans became far less popular.

The good news is, the original Balti pans are now, once again produced in the UK and the popularity of authentic Baltis is again on the increase.  A true Balti needs to be cooked in a stainless steel Balti pan and served in it, sizzling hot too!

Nowadays, most restaurant chefs cook their ‘Baltis’ in a normal frying pan and then serve them in an ornamental balti bowl but this, thankfully is changing.

Why should you try this chicken Balti recipe?

The original recipe on this page wasn’t cooked in a balti bowl so it really wasn’t a Balti. It also served 4 which again, just isn’t what Balti cooking is all about.

Here I have downsized the recipe and shown it cooked in an authentic stainless steel Balti bowl. I hope you give it a try but if you would like to make a Balti using the base sauce and pre-cooked meat, you should do that too.

If you would like to try an authentic Balti using a base curry sauce, pre-cooked marinated meat and special spices just like those at the best Balti houses, try my much more recent chicken, mushroom, chickpea, chilli and garlic Balti recipe here.

I think you’ll love them both. 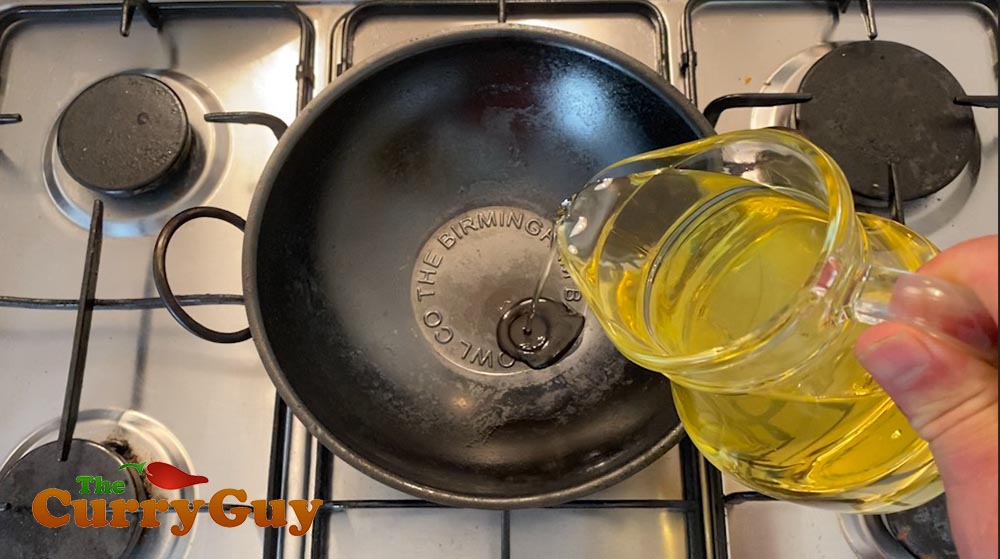 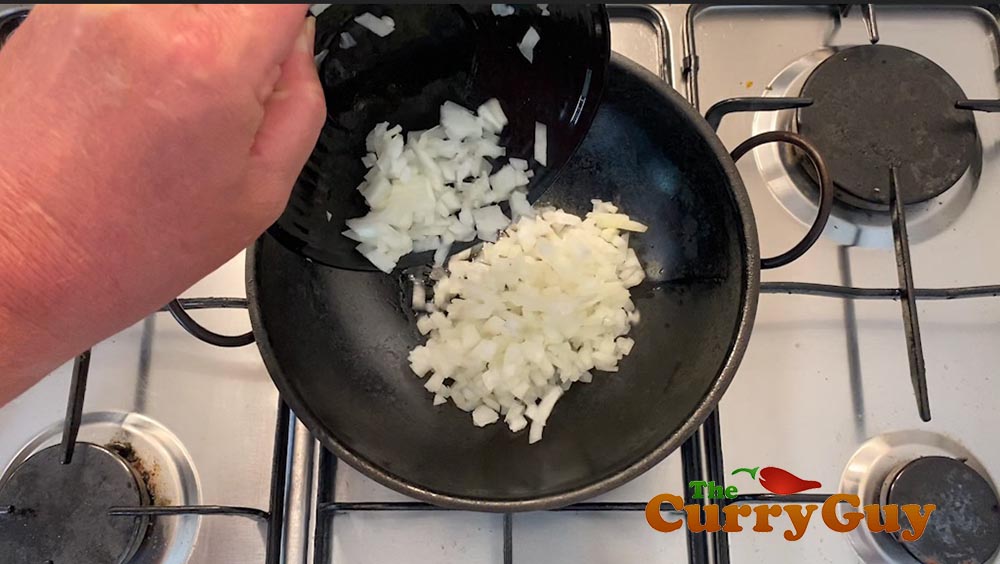 Add the chopped onions and fry for a few minutes until soft and translucent. 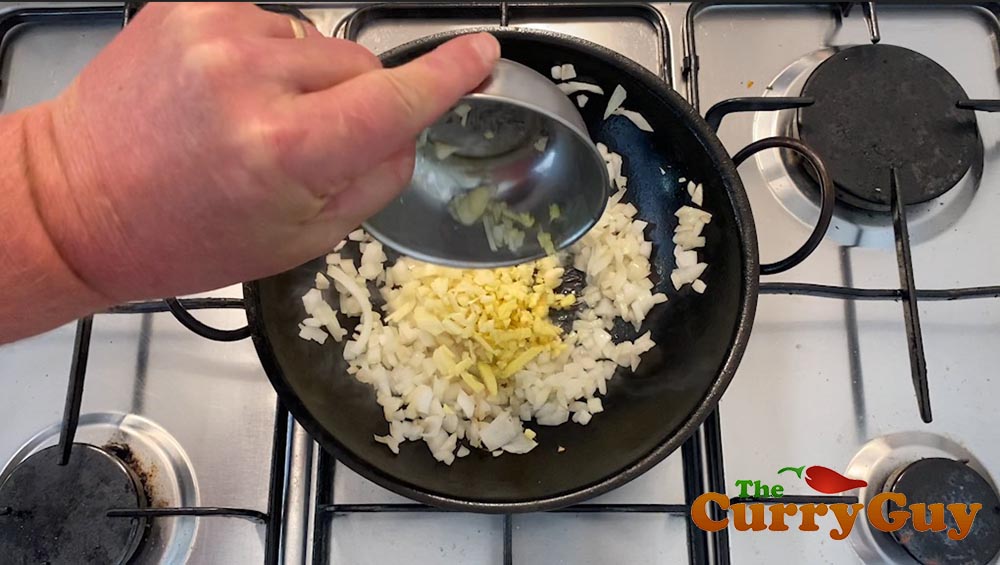 Add the garlic and ginger to the pan and stir well to combine. Cook for about 30 seconds. 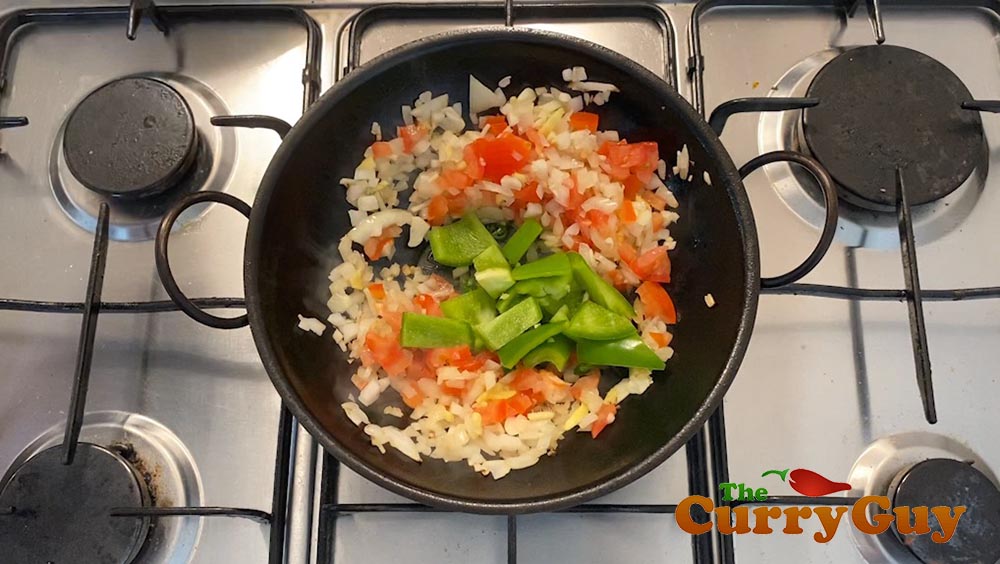 Add the remaining veggies and chillies. 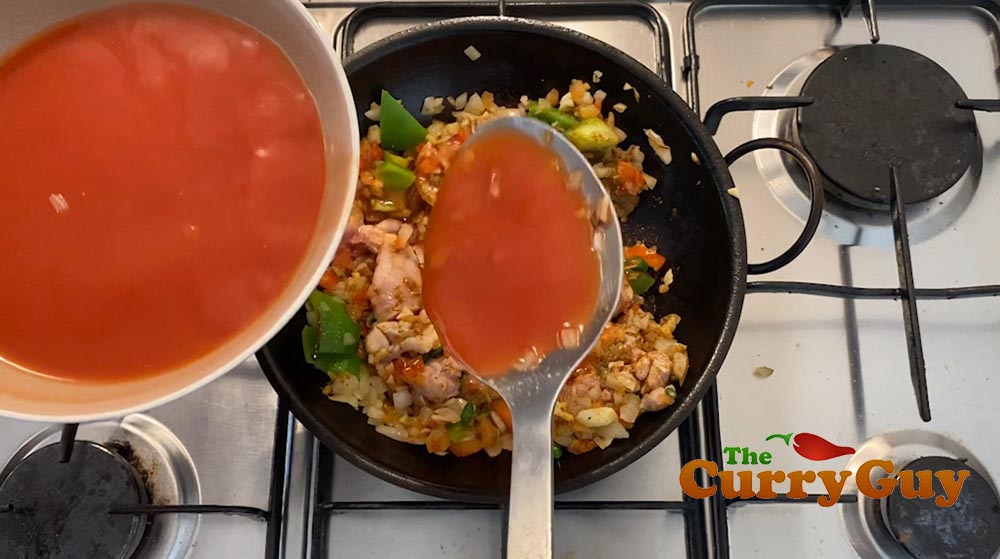 Add the tomato puree. Add more if you want a redder colour.

When you stir all these ingredients together, you have what is called a base masala.

That is the base of your sauce. It is what you do instead of adding base sauce. Adding base sauce, if you have it is a quicker option. It is also my preferred way to cook a Balti.

Here is the same Balti recipe but using a base sauce. 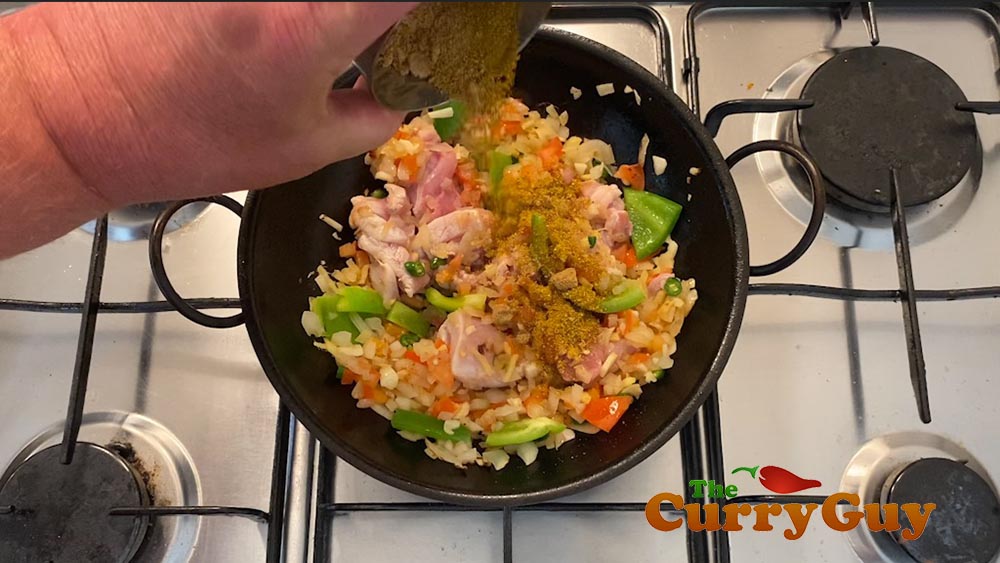 By adding the spices, you are taking that base masala and making it into the curry it is. 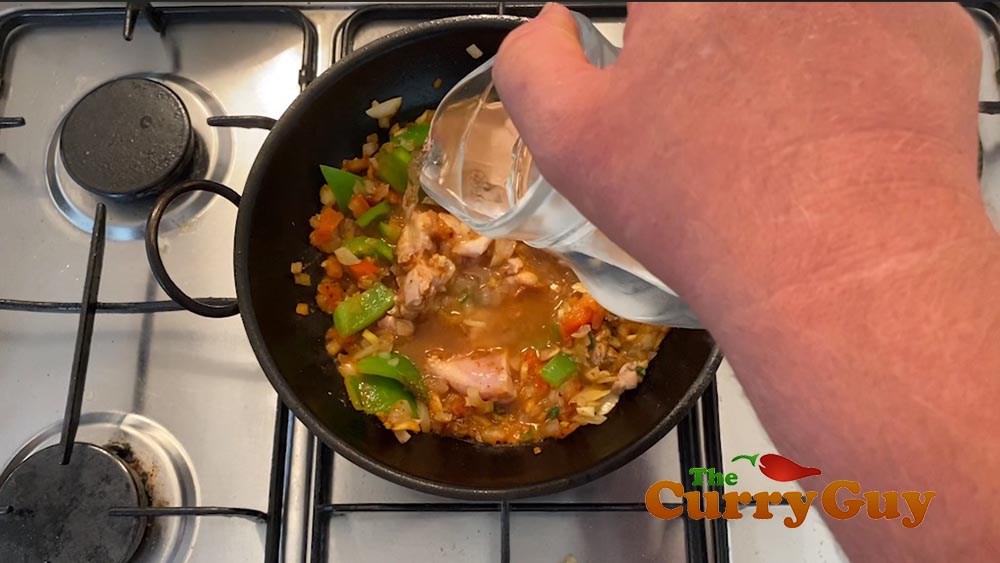 Now add the chicken and water to cover. This is a dry curry so you just want to add enough water to cook it. 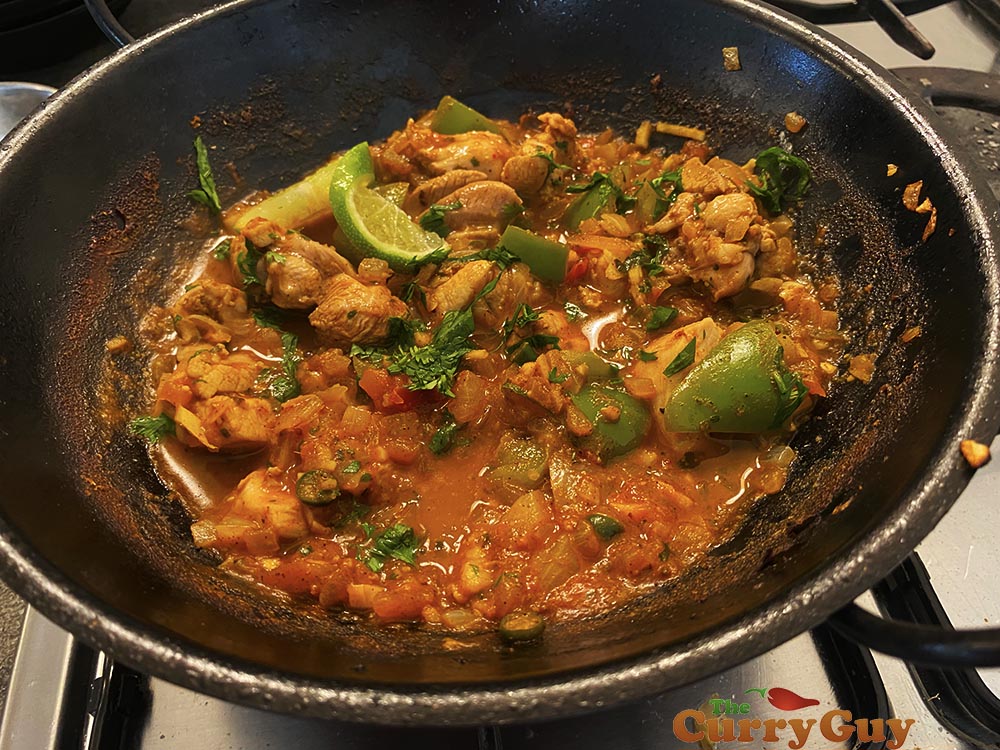 Be sure to cook the sauce down until it is quite thick. Perfect for dipping your naans into. 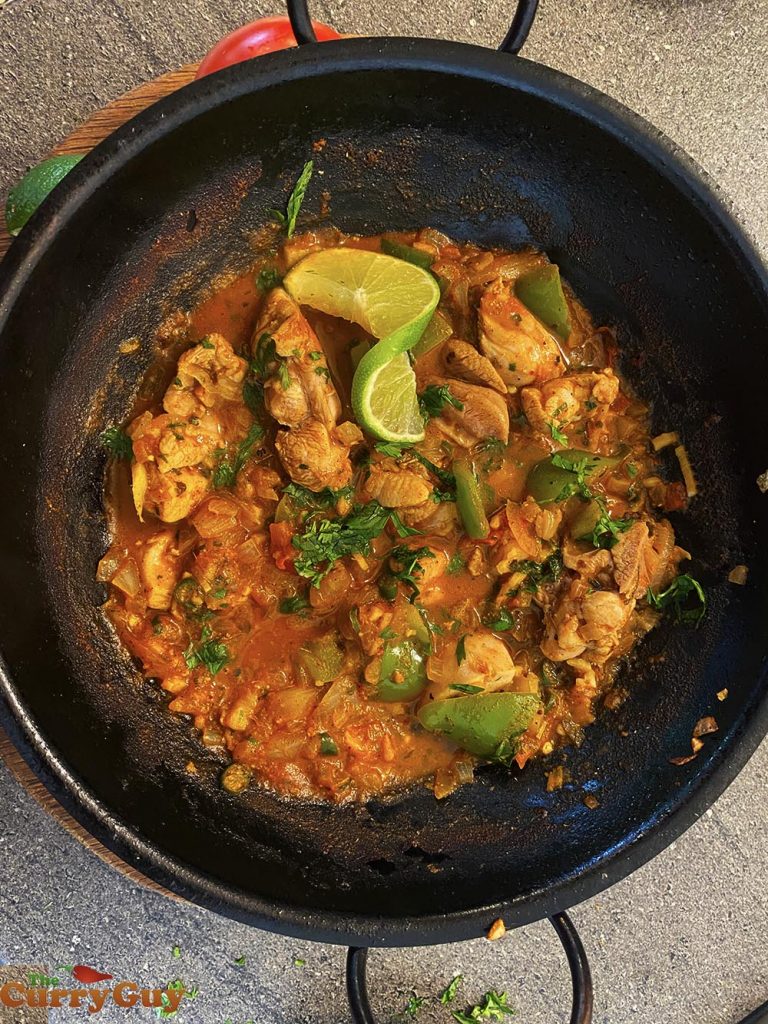 When you first start cooking baltis, you should cook over medium high heat. That is until you get used to cooking in the small stainless steel Balti bowl which gets really hot fast.

After you’ve made a few Baltis, you can and should turn the heat up. The sauce will caramelise around the edges of the bowl which adds amazing flavour.

Scrape the caramelised sauce back in for flavour.

Never fill your Balti bowl more than 2/3 of the way up. The curry will cook better if your pan isn’t full to the rim.

Plus, this is a curry to serve one to two people so filling it to the rim would be a bit much.

Yes. Have a kitchen towel nearby.

The balti pan will get very hot. Too hot to handle.

I have seen Baltis on fire when Balti chefs cook. How and why is that done?

Many chefs say they do this to burn off the excess oil. Personally, I think it is more for show.

If you want to do that, it usually happens when the garlic and ginger paste are added to the oil. There is moisture in the paste that flares up when it hits the flaming hot oil.

Doing this would be difficult with this recipe but if you want to give it a try, you should try my authentic balti with base sauce here.

I hope you enjoyed the chicken Balti recipe. If you do try it, please don’t be a stranger. Let me know in the comments.
Click here to cancel reply.

I've made this and it is ridiculously salty, I use the store bought tandoori masala and madras powder. But it just tastes overky salty. You mention Balti masala and garam masala in the comments but that is not in the recipe. I'm totally confused by this

I would suggest that you try different brands of tandoori masala and madras powder and definitely don't add salt at the end when I state 'salt to taste.' The saltiness of the recipe is up to you as I appreciate that everyone likes different salt levels. If you can find Balti masala and want to use that instead of tandoori masala that would work well too. You can sprinkle some garam masala over the dish at the end if you have it. Thanks Dan

Hi Dan, Just to let you know I’m a big fan and adore Indian food, however I have just made your chicken Balti recipe from my curry guy bible, and have noticed that your online recipe ingredients are quite different to the book . I make my own base curry and toast/grind fresh spices from your recipes . I am disappointed as not sure which recipe would be better, plus is there any additional recipes that vary from your books to your online recipes .

Hi Susan Quite a few of my online recipes differ to those in my books. I have learned things over the years and sometimes tweak my recipes but in most cases recipes differ as there is never any one definitive recipe for anything. It is up to you to decide which one you prefer and even then play around with it a bit to make it exactly how you like it. Thanks Dan

I made this curry for my mother in law and she loved it, as did the rest of the family. I visited my local Tesco the day after and noticed 'The curry guy bible', I bought it! There are some superb dishes that I can't wait to make.

Great to hear, thank you for letting me know. Dan

Hi is the the tandoori masala a paste ? thank you xx

Tandaoori masala is a powder, available in Asian stores. Thanks Dan

Just made this and I've got to say it was absolutely amazing. I left it to cook longer so I got those nice charred bits, I used a wok as I didn't have a balti dish but it worked great. Served with a home made naan and papadams.

Thanks so much for letting me know. I am glad the wok worked. Cheers Dan