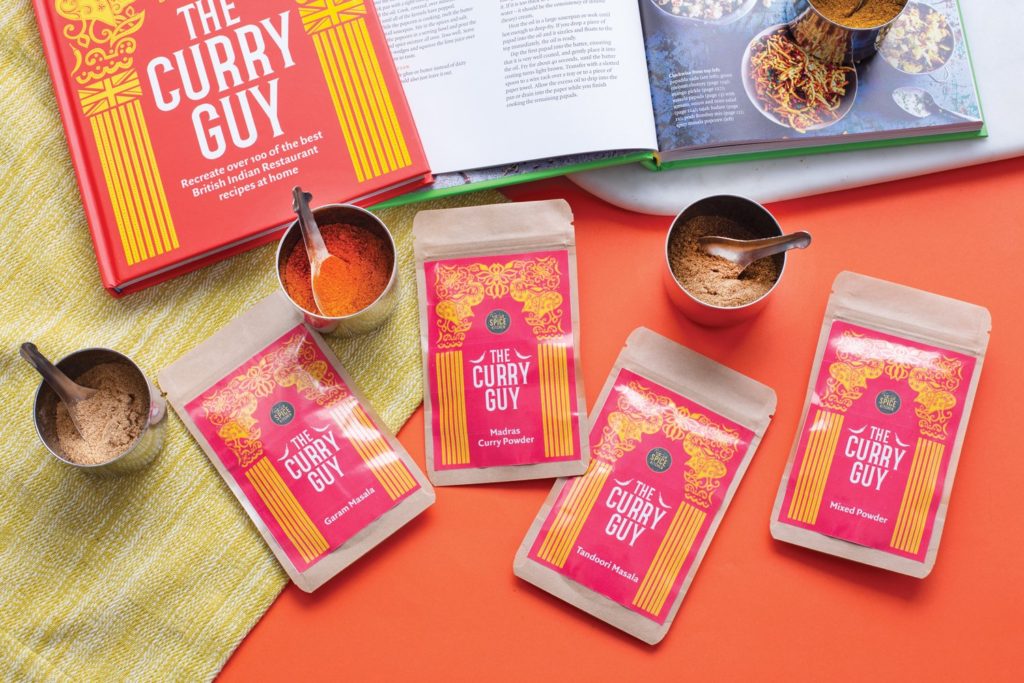 Cooking my recipes just got a lot easier! Try my new spice range or make your own spice blends using the following Indian spices.

If you are serious about making curry, then you will want to purchase each of the following Indian spices so that you always have them on hand.

Keep these in your larder cupboard and you will have the dry ingredients required to make 99% of the curries out there.

I am lucky to have quite a few excellent Indian markets where I live. If you are not so lucky, most of these ingredients can now be purchase easily online.

I do like to cheat and use ready-made spice blends from time to time but purchasing the Indian spice whole and roasting and grinding them yourself will give them a longer shelf life.

You could try my new spice blends which are made when ordered by Spice Kitchen UK following my spice blend recipes. Here is the link.

If you would like to have a go at making your own blends, I have included links to Indian spice blend recipes below.

Asafetida is the combination of several dried gum resins obtained from the roots of Iranian and Indian plants. It smells terrible in its powdered form but fills the room with a beautiful onion like smell when fried in oil or ghee. It is available in indian markets.

There are two types of bay leaf used in Indian cooking. The Indian bay leaf – the preferred leaf – is the leaf of the cassia tree. The other is the sweet bay laurel leaf. This is the bay leaf most of us in the West know and use. You can purchase the ‘cinnamomum cassia’ leaves from asian markets dried. These are not as attractive as the shinier and fresher laurel leaf type but they are perfect for grinding into spice mixtures.

Note: If you cannot find the Indian cassia bay leaf variety, the laurel leaf will do just fine.

The black version is far less common and is available in Indian markets. This black version is larger and uglier than than petit green pod. It is also a lot stronger both in flavour and aroma.

If you cannot find black cardamom, green pods can be used instead. Simply double the amount asked for in the recipe.

Red chilli powder is used in many different Indian recipes. When people think of curry house dishes, they often think of the hot spices that are added to so many recipes. Not many people know this, but the use of chilli powder in Indian recipes was introduced quite late. The chilli pepper that grows very well in India is native to the Americas and introduced to India by Portuguese colonists.

Cinnamon is used in countless Indian recipes. I tend to purchase cassia which is also know as false cinnamon. It is less expensive and tastes the same. True cinnamon is much nicer to look at. If you are using it to spice up a drink or decorate for a curry club function, go for the true cinnamon sticks.

Cloves are dark brown in colour and can be purchased pretty much everywhere. They have a sharp, sweet flavour and aroma. In Indian cooking, cloves are used both whole and in a ground powdered from. It is an important ingredient in many different spice mixtures and pastes.

Available world wide, the coriander ‘seed’ is actually the dried ripe fruit of the coriander plant. These fruit are about the same size as black peppercorns and are a very important spice in Indian cookery.

As with all ingredients it is important to buy fresh! Old coriander seeds taste like saw dust. Fresh seeds have a slightly lemony flavour.

Cumin seeds are the dried fruit of the cumin plant and is one of the most important spices in Indian cooking. There are three different versions. White cumin is the most common. There is also brown and black cumin seeds that are usually lumped together and just called black cumin.

Black cumin is not as common but is equally as delicious. I recommend purchasing both black and white cumin seeds and grinding them yourself for the best flavour.

Fennel is the dried seed-like fruit of the fennel plant. It is found and used in cooking world wide. Fennel seed is a very important ingredient in many Indian recipes.

The fenugreek seed is slightly rectangular in appearance. It is available in Indian and middle east markets. Although it is used in some curries, it is very important in vegetarian cooking and pickling.

This is the powder made from drying and powdering fresh ginger roots. Good quality ginger powder is light in colour with a piquant taste and sweet smell. It is used in everything from curries to pickling to homemade relishes.

Mace and nutmeg are both part of the fruit nutmeg tree. When the nutmeg fruit is ripe, the skin of the fruit (the mace) peels away from the fruit to expose the brown nutmeg berry. The mace is carefully removed from each nutmeg fruit and then dried. The resulting dried spice is often referred to as mace blades.

Although mace and nutmeg are both from the same source, they have completely different tastes and cannot be used interchangeably. Mace is used as a flavouring in curries, pickling and relishes.

I cannot begin to tell you how often I now use this spice after years of ignoring it in recipes. The mango is native to india but grown in tropical climates around the world. To make the powder, unripe mango fruits are picked, peeled and sun dried and then ground to produce a pale tangy powder.

Mango powder is often used as a souring agent in place of lemon juice.

Nutmeg is found worldwide and has a sweet taste and gentle aroma. It is available both whole and powdered. It is used for flavouring many different Indian dishes.

Also known as Nigella, ‘onion seed’ looks a lot like true onion seeds but actually has nothing to do with the onion plant. These seeds have a sweet taste and aroma similar to oregano. It is sold whole in Indian markets.

Indian paprika come from a mild chilli pepper grown in the kashmir region of India. When the chilli is ripe, it is sun dried and then ground into a powder to produce a mild tasting spice that is brilliant red. It is sweet just like the more common Hungarian version. Indian Paprika is available in Indian food stores. You can substitute of paprika varieties if you cannot find Indian produced paprika.

To make this very interesting spice, the seeds of the pomegranate are sun dried and then ground into a powder. This powder is used in a similar way to mango powder as it is a natural souring agent.

saffron is the most expensive spice in the world. It is actually more expensive than gold. Due to its high price tag, saffron is used quite sparingly but it is used very often. You need to have some on hand!

Native to India, the tamarind pod resembles pea pods. It is the pulpy pod of the tropical Tamarindus Indica plant. It is quite sour. Tamarind is available in block or concentrate variety. I prefer the concentrate as it tastes like block tamarind but is a lot less work. Tamarind is used in many relishes and curries.

Good quality turmeric is one of the most important ingredients in commercially made curry pastes and used in most curries. It is used throughout India primarily as a yellow colouring agent but it also adds a woody unique flavour to dishes.

I would like to keep this list updated. Have I left out any spices you feel should not have been? Feel free to leave a comment and let me know.

Would you like to try some delicious homemade spice blends? Here you go!

in hindi we say fennel seeds ... saunf not saung.pls amend

Thank you for that. All corrected now. :-)