This naan recipe is so good and can be made quickly for that last minute fresh naan craving! 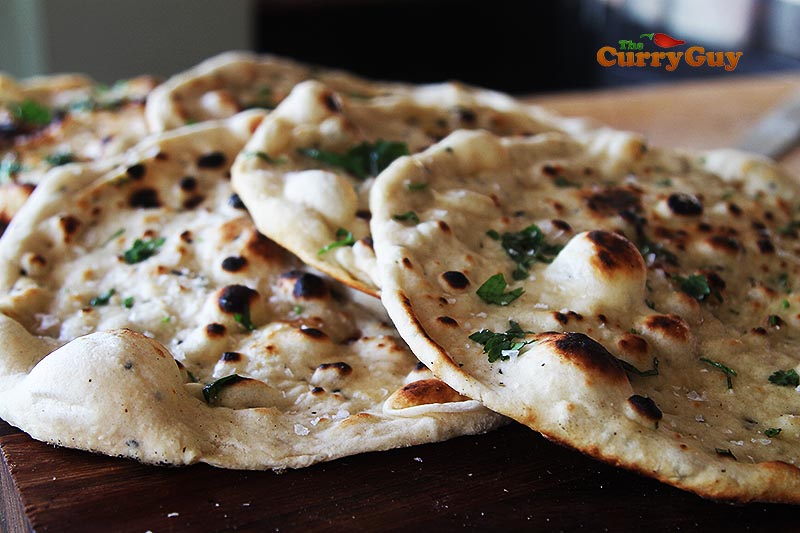 This naan recipe with self raising flour works so well. These are just as good as naan cooked in a tandoor oven.

My latest naan recipe even earlier than planned!

You weren’t going to get this naan recipe for a few months.  It’s going to feature in my next cookbook ‘The Curry Guy Bible’ which is scheduled to be out in October 2020.

It is my favourite naan recipe because the naans taste just like they do at curry houses and the recipe is also very simple.

The secret to this naan recipe is using, as they do at Indian restaurants, self raising flour.

With things as they are at the moment, I decided there’s no better time than the present to share this easy naan recipe with you.

Although I normally cook the naans in my tandoor, they are just as good cooked on the stovetop. One thing is certain… this naan recipe is a thousand times better than those packaged naans you get at the supermarket.

This is a curry house style naan recipe.

At busy Indian restaurants, it’s not always easy to plan how much naan dough you will need for the evening. They could suddenly have several groups walk in and they can’t be left without enough naan dough. There’s a lot of profit in those naans!

The idea behind this naan recipe is to prepare the dough using ‘bakers measures’. If using 250g of flour, you need to use 250ml of liquid.

I demonstrate this naan recipe at all of my cooking classes and it is always a big hit. For the classes, we make this small version of the recipe like this but I also make a large batch which we cook in the tandoor.

Keep the rule of equal amounts of dry and wet ingredients – roughly speaking – and you can scale this recipe up and down easily.

That dough looks more like a batter than a dough!

That’s right. The dough is very wet, like full fat cream when you first make it. That is how it is stored and restaurants. If you keep it covered in the fridge for one or two days, it comes alive and the flavour gets even better.

This is  a naan recipe, however that you can make on a whim and enjoy fresh naans immediately.

Plan ahead and keep the dough ‘batter’ in the fridge for a day or two or just make up a batch and eat it when you want.

Both options are fine with this delicious fluffy naan recipe.

When you want a naan, just take some of the dough and slowly add flour until it is soft and slightly sticky to the touch. It should be soft enough that you can form it into a flat naan without the need to use a rolling pin.

By the way, Once you’ve made this naan recipe, you might want to cook something up to eat with your naans. You’ve got to give my my 7 ingredient lamb curry a try. 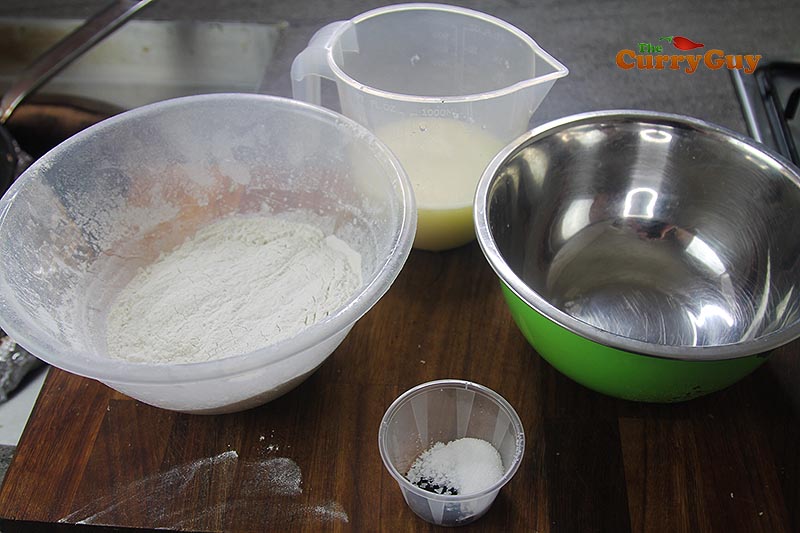 Here are all the ingredient you need. 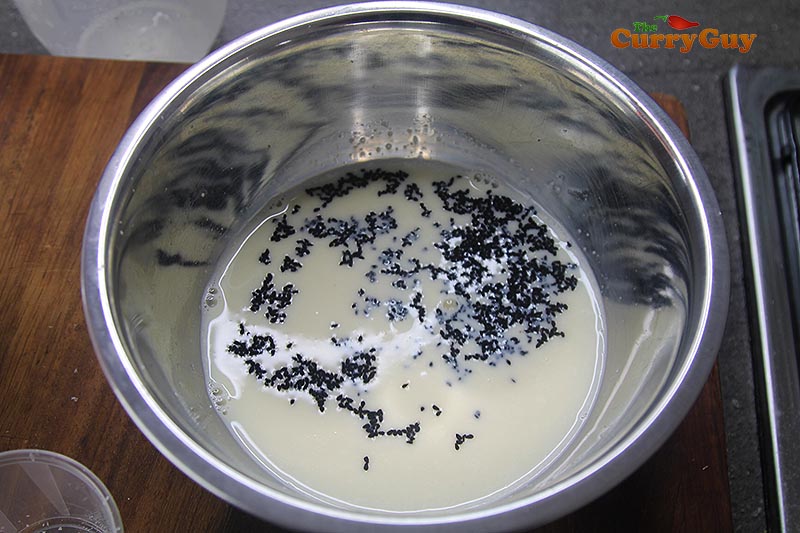 Pour the liquid, onion seeds, salt and sugar in a bowl. 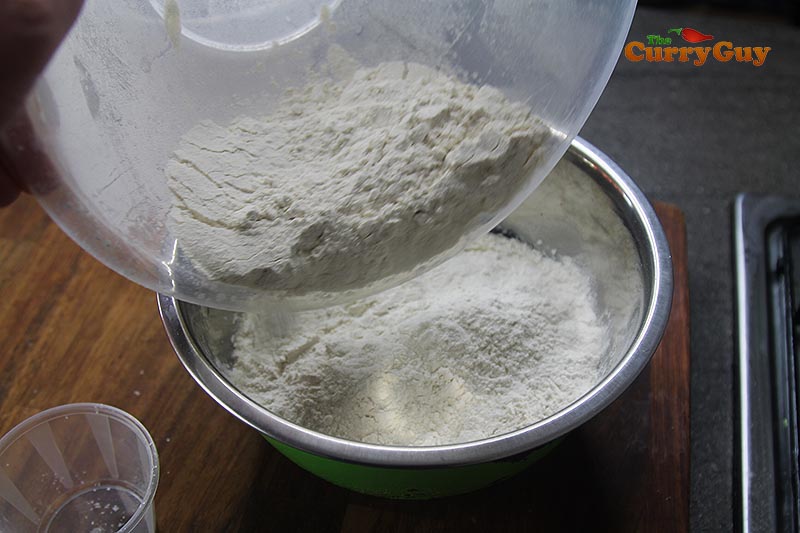 Slowly add the flour, stirring as you do.

Recipe Suggestions… Try these naans as a side for one of these popular curry recipes. 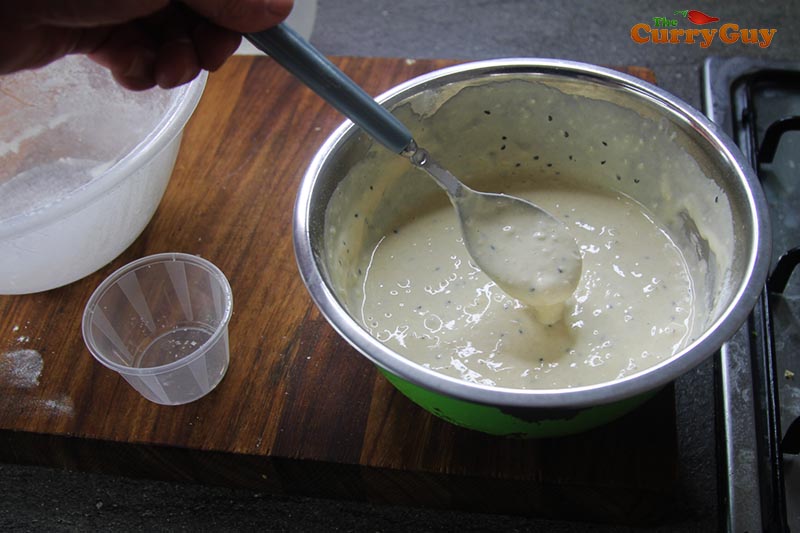 The dough will be very wet. Too wet to use. 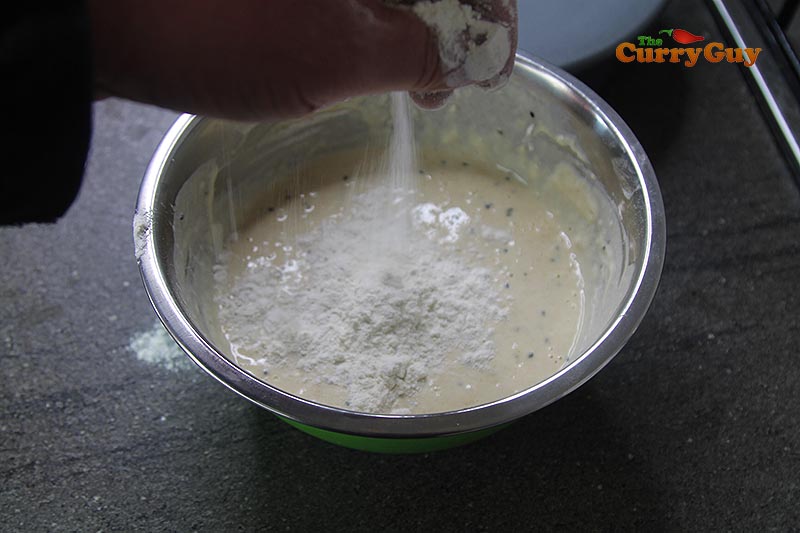 Add more flour when ready to cook your naans. I used about 7 handfuls. 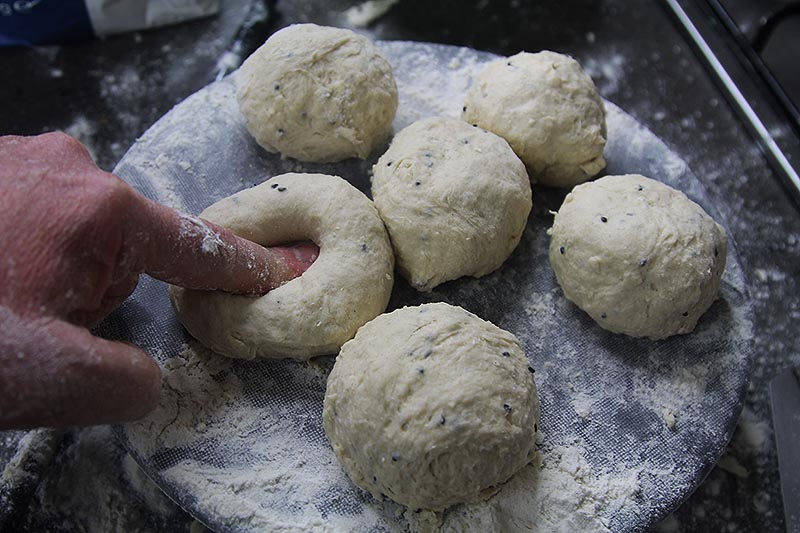 Divide the dough and form into balls. The dough should be soft enough to flatten without a rolling pin. 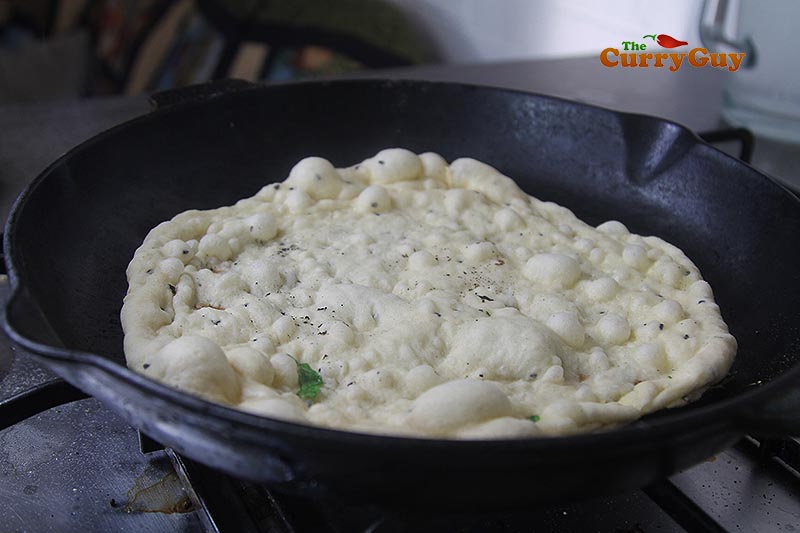 Cook the naan in a very hot pan until bubbles form. 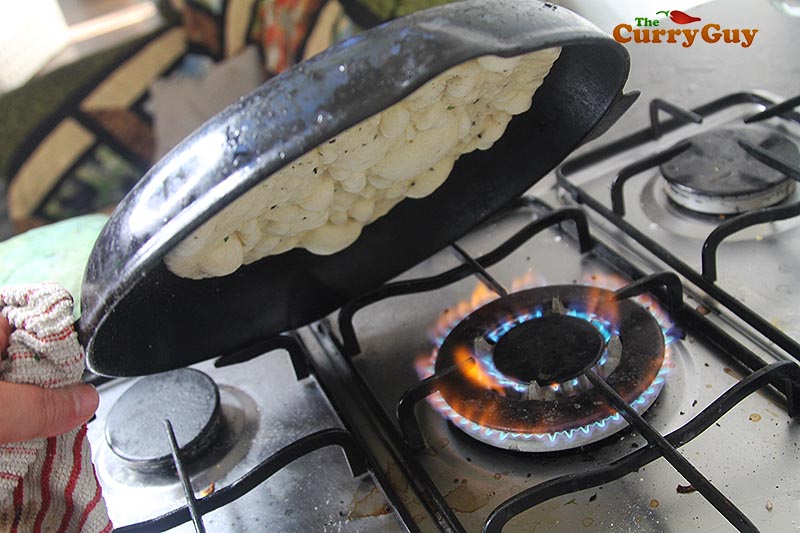 Turn the pan over if you have a gas burner. Otherwise, just flip the naan. 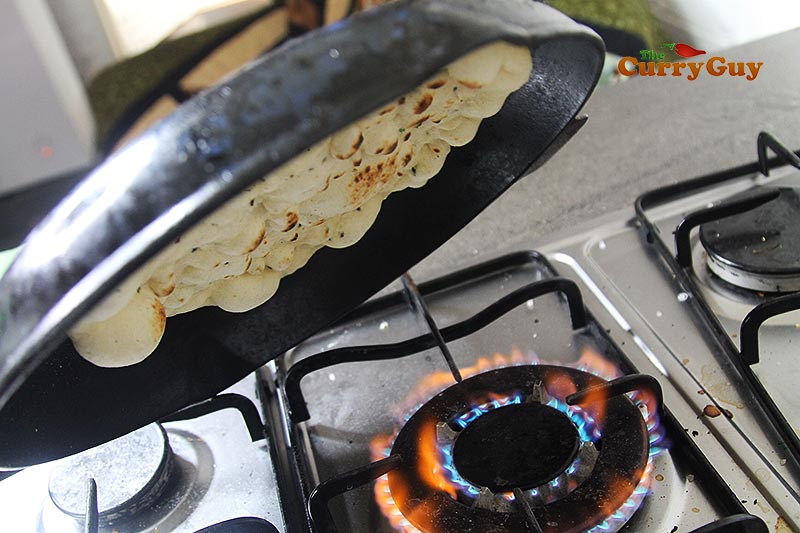 Toast the top to your preferred doneness.

I hope you enjoy this easy naan recipe. If you do give it a try, please don’t be a stranger. Let me know in the comments. I’d love to hear from you. 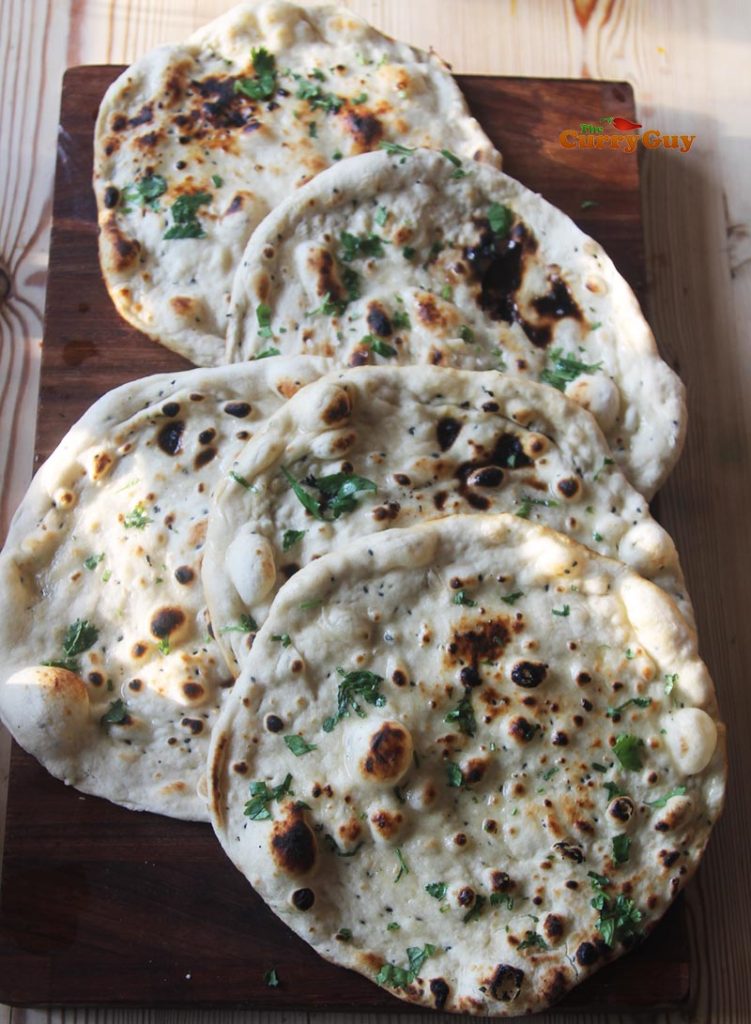 You can make homemade naans like these in minutes.

Out here on the West Coast of Canada we can't get self raising flour. Live a hour from the nearest town so buy my flour in 20kg bags - go shopping about every two months. Going to have to make up a batch of SR Flour just to try these naans, much quicker than the recipe I have been using. Also have a bread recipe that uses some old dough kept back at least 24 hours and it makes such a difference to the flavour.

Thanks for your message, that is certainly dedication so hopefully the end result will be worth it. They are good! Dan

I didn't know what to do with the oil so i put it in with the rest of the ingredients. Didn't realise it was just for your hands. They still came out bubbly and fab!

Great it worked, nothing wrong with an extra bit of oil! Thanks Dan

Just attempted this for the first time, but my whisked mix ended up very very tough. Added a full cup more of milk (misreading thinking I’d missed off when looking at cups of flour). The new mix now looks like your but must be wrong as it’s got triple milk 🙈

Are the written amounts the same as what you did in the video?

Not sure where I went wrong at first

You just need to add enough milk to make it the right consistency as my video on Facebook and Utube. The amount of liquid to add varies depending on lots of factors but it sounds like you got there in the end. Thanks Dan

Little confused by some differences in this vs the recipe in the bible.

Both say they serve 6 (make 6 naans) but this website recipe has half the ingredients as the book version. Does that mean the book makes 12 or this makes 3?

Also, do these stick to the pan without using water on the bottom? Whenever I've cooked pan naans previously, recipes have said to stick them with water. Would these still stick so I can turn the pan over?

Hi Matt The naans in the Bible are a big bigger so you can make 6 from my web site recipe but make them smaller. As long as you follow my recipe and get the pan hot enough they should not stick to the pan. Thanks Dan

Someone else asked about making these into garlic and coriander naans - but when/where would you add the garlic? Would you add finely chopped or minced (?) garlic Into the mix when making the dough or sprinkle it on while cooking the pan or would you just make a garlic butter and spread it on while cooking in the pan or even afterwards? I'm assuming the coriander would go on at the last minute as with other recipes but just not sure about how to make them nice and garlicky like the restaurant ones.

Maybe you could update the recipe to instruct people on that option? I think most of us curry lovers prefer the garlic ones!

Thanks for your message. I heat up ghee and add a few teaspoons of minced garlic and pour it over the naans once they are cooked, that works really well. You could sprinkle some coriander on top at this stage too. Dan