Pre-cooked chicken not only makes curry better but tastier too. 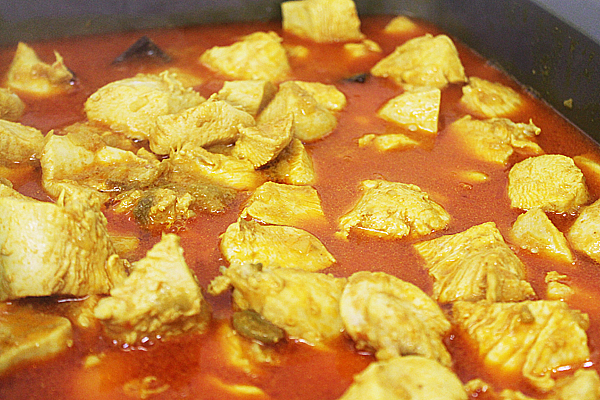 Why pre-cook your chicken?

Pre-cooked chicken, meat and veggies play in the preparation of British Indian restaurant style meals. Pre-cooking the chicken until tender not only makes cooking in Indian restaurants faster but tastier too.

This is very important with tougher cuts of meat like lamb, goat, beef and pork but chicken and other meats benefit too.

I like to vary my recipes for pre-cooked chicken and meat. I change them often but at the end of the day it’s all done to give the meat that famous British Indian restaurant flavour.

This is done not only for flavour but speed. If you have your pre-cooked chicken and its stock ready, you can whip up curry house style curries in minutes!

Think about it… A delicious chicken curry whenever you want it for much less than the local takeaway!

I pre-cook chicken in several different ways. So if one of my curry house recipes calls for pre-cooked chicken, you could use any of these methods.

For tandoori style chicken, I marinate the chicken pieces in a yogurt marinade for up to 48 hours and then cook it fast in my tandoor oven, home oven or on the barbecue.

The yogurt works as a tenderiser for the chicken meat. The end result can served as is or it can be added to curries such as tandoori chicken tikka masala. You can check out my ‘go-to’ tandoori style chicken tikka recipe here.

The other way I prepare chicken is to simmer it in a fragrant broth for about 30 minutes until cooked through. This is the following recipe. Cooking chicken like this gives the chicken a much lighter flavour and softer texture.

It’s a good way to cook chicken for curries such as chicken korma where I lighter look and flavour is usually preferred.

Use the stewing method with small bite sized chicken pieces (tikka) to make chicken tikka masala. I think you get the idea… Do you want chicken korma or tandoori chicken tikka korma? The choice is all yours.

The cooled chicken can be stored in the fridge for up to three days or frozen.